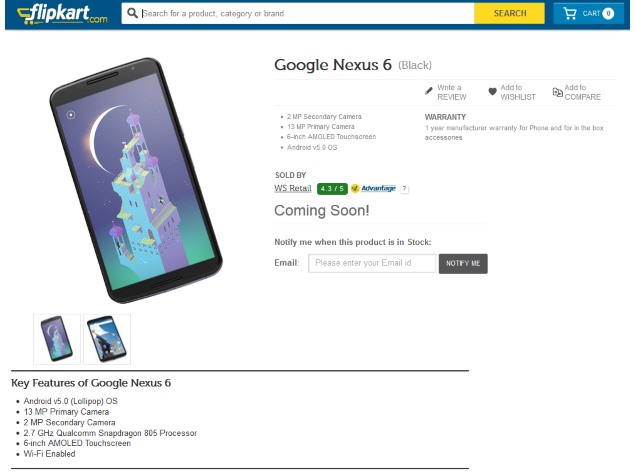 Google‘s flagship phablet, the Nexus 6, has been listed in India by Flipkart without any price or availability. Also, the Google Play India page for the Nexus 6 doesnâ€™t have any information regarding the release so far, though Nexus 9 page had recently listed the tablet with a ‘Coming Soonâ€™ tag and price of Rs. 28,900.The Flipkart listing of the 32GB variant of the Google Nexus 6 notes that the device is ‘Coming Soonâ€™, and it is still uncertain whether the Nexus 6 will be listed by other e-commerce sites in the future or if it will only be available via Google Play and FlipkartÂ in India.In the US, a factory unlocked Google Nexus 6 with 32GB storage on Google Play costs $649 (approximately Rs. 40,000) and the 64GB variant costs $699 (approximately Rs. 43,000). The device will also be available separately via carriers in the US like AT&T, Sprint, T-Mobile, US Cellular, and Verizon, each of which will announce their own pricing.

In the meanwhile, over in Europe, the Nexus 6 was reportedly set to go up for pre-orders starting Monday, November 3, but a Dutch website reports pre-orders will be delayed to November 18. The report also notes that the 32GB Nexus 6 is expected to be priced at EUR 569 (approximately Rs. 44,000), and 64GB at EUR 649 (approximately Rs. 50,000).